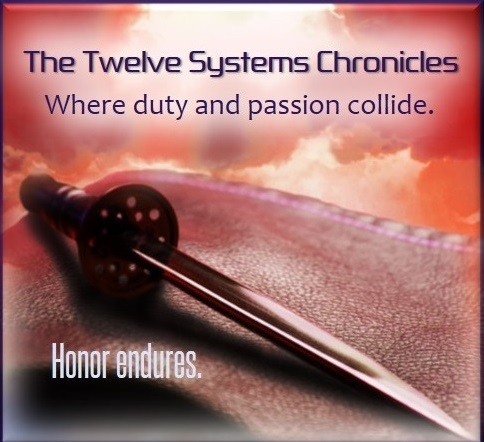 This day, I live.  Lilian stretches sleep tight limbs, toes curling against the chill tile, even as the barren balcony overlooking the interior courtyard begins to glow with morning light.

There is only this day.  Widening her stance, she settles the gold warbelt into place. She has tried sleeping without it but wakes constantly in the night.

I will not fall.  Monsignor’s will has not abated.  He wishes her to return to his bed, and she wishes she dared. At the thought of monsignor, desire rises. No matter how often she self-pleasures, it does not sate her.  Naught compares to the delight of his kiss, the ecstasy of his shaft deep within her, the power of their shared passion. The sense of safety she finds—

Her reverie shatters at insistent chirps from her personal slate. Crevasse swallow it! She is distracted yet again. How long has she stood staring; her thoughts filled with a man she cannot have?

Reaching for the device, she wonders at the early bell. Other than Monsignor, Maman, and Apollo, only a few have the code for her personal device.  Pippa? No. It is but two bells past dark of night in Fort Rimon. Dean Joseph? Her heart lifts only to plummet when the source of alert appears.

Adelaide’s Thorn.  She has been expecting the black raider to contact her.  She thought it would be the sevenday gone, she should have known Tiger Sylvester would wish to toy with her. Refusing the visual request, she taps out a terse reply: First Day after First Settlement Day.  As agreed.

Dropping onto the bed, she gazes into the blank slate, seeing Katleen’s house as it was when they returned from Socraide Prime after Gariten’s execution.  The door is open, the windows on the first level shattered, filth and foul curses covering the walls.  Inside it is worse. The once gracious reception chambers ransacked and what was not stolen has been destroyed or covered in filth. The acolytes who escorted them from the stellar transit center are sympathetic but unhelpful. They can take the Seer to the shrine quarters, but sentiment against Gariten’s daughters is beyond hostile. There is no place for them. The seer, in turn, refuses to leave her daughters, becoming increasingly unstable with every moment.

In the end, the Keeper Waiman arranges a compromise.  The shrine servitors aid Lilian in clearing out three of the guest bedchambers where damage has been the lightest. The rest of the house is scrubbed free of filth and sealed tight. Shrine guards repair the doors and install the heavy shutters paid for with the proceeds from the sale of what little had not been destroyed. What is left of her dwindling funds and Maman’s shrine stipend will keep them fed until she enters the cartel.  It will not begin to cover the bribes she must yet pay to the protocol review judges or forfeit Katleen’s house.

Lilian’s hand finds her thorn as it did the day she entered Tiger Sylvester’s River Quarter home.  Late in the green season the riverfront windows are open to the pleasant morning cool.  Tiger Sylvester sprawls in a throne-like chair, the loosely wrapped dark blue robe exposes a muscular chest with a mat of dark hair. His equally muscular legs with equally dark hair, are thrust out before him, his expression bored as he sips tea.

That he did not offer her a seat was meant to demean her, but she is glad to stand. She can attack or flee as needed; her thorn easy to grasp beneath the drape of her jacket.  Nor is she deceived by his air of indifference. He is tempted by her offer.  She presses her case. “The house is worth more than ten times the amount I would borrow. If I default, your return will be exceptional.”

Tiger shrugs. “I have no use for another house.  Nor do I care for the quality of the neighbors in that section of the city.”

Lilian cannot argue his distaste of her neighbors, but she doubts that is a true issue for the raider. “You toy with me, sir.  The house is but an asset.”

The dark eyes travel over her breasts, waist, and settle at the juncture of her thighs.  “Your house is of no interest to me, but you are.”