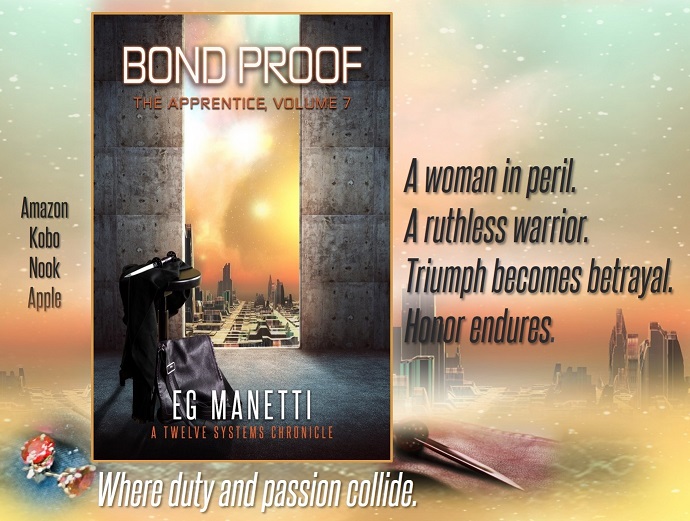 This once, it is well he sees so much. “It was on the day of my birth festival that I discovered what they had done. A package arrived from Gariten with what were to be my cotillion pearls. They were awful. Overlarge and mixed with emeralds, they were a gift for a woman grown, or a doxy.”

Milord’s free hand strokes her shoulder. When did she being to tremble? She had not thought this would be so difficult. “Maman went pale and then began to rant about trading children for emeralds. I was to flee from the darkness. The cousin became enraged, accusing Maman of being selfish and lacking honor, that the wedlock with Gariten was for Maman’s benefit. I knew it for a lie when I heard it.”

Anger floods with the recall of the cousin’s calumny. Milord’s thumb strokes her collarbone, encouraging her to continue. “The history of the contract was in Sinead’s Shrine, and as I was sixteen, they provided me access. Once I understood what the northern cousins had done, I could not understand why Maman permitted the woman to arrange my cotillion. With Keeper Waiman’s assistance we were able to discover that Gariten had arranged it all, including that the cotillion would be held at the home of one of his commerce partners and that he planned to attend. He may have planned to compel me to return with him to Socraide Prime. I know not.”

“Socraide’s sword.” Milord’s hands tighten. “Did the keeper not suspect?”

“It was Keeper Waiman’s first season.” She cannot resist turning her fingers within milord’s and clinging. “The former keeper, who is the current Lord Prelate, had been elevated to Sinead’s Canon Master and relocated to Sinead’s World. When he learned what went forward, he aided us in having the cousin evicted from Katleen’s house and banning the cousins from ever entering.”

“That was why your mother was deteriorating. She knew the cousin was in league with Gariten but could not halt her.”

“I believe so. With Gariten involved, I dared not remain in Crevasse City and there was naught in the universe that could have compelled me to attend a cotillion of his devising.”

“So you left the next day.” Milord’s hand cups her face, turning to meet her with dark eyes filled with compassion. “What of Dean Joseph?”

“He was enraged on my behalf and offered to arrange a cotillion for me on Mulan, but I could not tolerate the notion.”

“You never had a cotillion?” Milord’s thumb strokes her chin.

As much as his compassion warms her, it is not necessary. What little interest in cotillions remained after she discovered the cousins’ perfidy was lost with Ronan’s death and her anger at the Universalists for making outcasts of those who went to save the settlements. “I do not regret it. It would not have been the same without Maman, and mine was so late in the season, there were but two others I would have attended.”

“The pearls were sold with all else?”

Honor is my blade and shield. She could say naught more, but there is no purpose in withholding. “Sold, yes, but long before the ruin. I used them to fund my entrance into the commodities exchanges.”

Milord’s eyes narrow. “I thought those funds came from your stipend.”

Honor knows not fear. “When I refused to return to Crevasse City for a proper cotillion, Gariten slashed my stipend in half. It was enough for clothes, transit to visit Maman and Katleen, but not much more. Had I an interest in cotillions, I could not fund the wardrobe or other aspects.”

Milord frowns. “You took private quarters at twenty. Your accounts showed income that was meager for a cartouche heir, but substantial nonetheless.”

“Milord did not have full access to my funds from the commodities exchanges,” Lilian says. “Although much was reinvested, steady flows were moved to a secondary account that I augmented with wagers. Those funds appeared in my account as if the Grey Gyre stipend.”

Before milord can reach the next conclusion, she adds, “At nineteen, I refused to join Gariten on Socraide Prime to be tutored in his enterprises. I wished to be nowhere near what, by then, I knew was black and gray commerce. He threatened to sever my stipend at twenty when I became an adult. I began to work the indulgences. I took my winnings in commerce tokens. The day of my twentieth birth festival, I opened the secondary account in Crevasse City. Unless one knew to search, it appeared as if funds flowed in from Grey Gyre and out to my primary account.”

Lucius is stunned. It is no wonder the woman thinks it liberty to spend the day abed tinkering with algorithms. At nineteen she created a shell enterprise and funded it with legitimate but untraceable funds to maintain the appearance that she received an heir’s stipend.