One of the most wonderful aspects of the independent publishing revolution are books that don’t fit the traditional publishing mold. Enjoy reading paranormal, fantasy, and science fiction? Want it mixed with romance, suspense, action, plot twists, and steamy times? Once, such genre mashups were about as common as unicorns. Today, there are so many options, it can be hard to choose. In honor of Halloween and all things that go bump in the night, here is a trio of indie published urban fantasy and paranormal romance authored by my friends Marie Johnston,  Rachel Chanticleer, and Veronica Del Rosa.

Another wonderful aspect of the indie revolution; free and cheap e-books.  This trio ranges from $0.0 to $3.99 (Less than a Starbucks’ Pumpkin Spice Latte).

Marie Johnston  pens steamy paranormal romance with a wicked bite because as all paranormal lovers know, a good vampire story never dies.  In her Sigma Menace series, the werewolves are the heroes and the government agents determined to eradicate them the stuff of nightmares.

After being ditched only weeks before her wedding, Cassie Stockwell wasn’t out looking for a hookup. Then the devastatingly handsome bartender she’d been trying not to obsess over for months offered to give her a ride home. What could one night hurt?

When his future was almost taken away after one impulsive decision, wolf-shifter Jace Miller waited patiently for months before making a move on the woman he knew to be his destined mate. But will one night of passion keep his little human by his side once she learns of his world and the danger it brings to her doorstep?

In Veronica Del Rosa’s Toronto, magic co-exists peacefully with the ordinary, for the most part… Each of the nine Enforcers & Coterie  stories features a different couple with magical, supernatural, and martial arts capabilities.  They inhabit a dangerous world where passions run as hot as the action.

Her existence is illegal.
Julia Hill joined the Mage Enforcers to save her own life. But if her colleagues find out she’s magic resistant, they’ll execute her without hesitation. It hasn’t been a major problem—it’s not like she’s going to spill her secret—until she meets Jackson. Or, more accurately, until he kidnaps her.

A demon summoning ends in murder.
Jackson Thorne is on the run, framed for summoning and losing control of a demon. His clues are sparse and allies are hard to find. Can he trust the woman he accidentally abducted or will she turn on him the moment she has the chance?

Rachel Chanticleer’s Crescent City Arcana Series is based in Louisiana where a new witch allies with an immortal Roman gladiator to defeat black magic, demons, and other assorted evil doers.  A slow-burn romance, it is light on steam and heavy on action and relationship development. The first installment is  the novella, The Hunter and Witch. 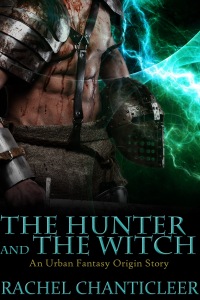 A lethal stranger hunted Bethany Hayes down and nearly killed her. But without uttering a single word, he spared her life and vanished, turning her world upside down. Left with newfound abilities and visions of her attacker, Beth tried to make the most of this second chance.

Lucius Sempronius Asper learned to kill in the amphitheaters of ancient Rome. Enslaved and bound by the dark magic of a powerful witch, he spent centuries eradicating innocent witches at her command. Though made immortal by her enchantment, he was as good as dead inside.

All Lucius knew, what he thought he’d become, changed with Bethany. His one impulsive act of salvation linked them in ways they never could have imagined.

2 thoughts on “Romance that goes bump in the night”